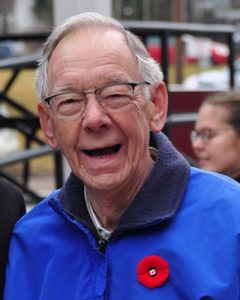 The Bulkley Valley Christian School community is saddened by the loss of Harry Kruisselbrink. Harry passed into the arms of his Saviour on the morning of May 2, 2022.

Harry lived with an attitude of generosity and open-handedness to his community. His love of people, community and history was evident to anyone who knew him. He was keenly interested in human stories and became well known as a historian of Smithers and the Bulkley Valley. More often than not, someone looking into the history of a trail, business, organization or development would bump into Harry’s knowledge and willingness to share. Harry shared his knowledge out of a passion for people and a genuine interest and care. The history he shared in story was not abstract to him—his smile in story-telling betrayed his first-hand experience and knowledge of the stories he was sharing.

Harry’s generous nature led him to contribute to more community projects and institutions than we can name. From church and school to civic institutions such as Smithers town council, boards and community initiatives, Harry contributed enthusiastically and with a quiet wisdom and passion.

At BVCS, Harry was the benefactor and contributor to the legacy of Christian education. His parents were instrumental in establishing our school (then known as Canadian Christian School) in late 1950s and early 1960s. Harry attended this school as a student, then later participated as a parent and, for the past many years as a grandparent. He served on our school board and participated in the life of BVCS.

Harry leaves behind him a family who will grieve his passing and celebrate the life he lived. We pray for God’s peace and comfort for Audrey, who herself has a legacy of generosity that is no smaller than Harry’s. We are confident of the promise given to us by the risen Christ that in Him death itself is defeated. We know that by God’s grace in Christ, Harry now is present with the Lord.

There’s always a lot going on at Bulkley Valley Christian School, and we’d like to keep you in the loop about it. Just sign up using this link and we’ll include you in our monthly eNewsletter.