Bulkley Valley Christian School mourns the loss of John Bandstra, who died peacefully at home on the morning of November 20 at the age of 97.

John was instrumental in the establishment of what became Bulkley Valley Christian School. With the support and love of Margaret, John participated in the life and development of this school through his involvement as a parent, board member, volunteer, “bus driver” (closed down Bandstra Transport each day at 3 pm to drive the out-of-town kids home in his station wagon), donor, grand parent and great-grandparent.

As a school, we are deeply grateful for the impact that John and Margaret have made in the establishment, life and future of this school. They, with others of their generation (some of whom are still part of this school community), have given a gift to future generations through their sacrifice, prayer, care, commitment and hard work.

We pray for God’s strength and peace to be with Margaret, John’s children and their spouses, and his many grand children and great-grandchildren.

From the memorial card:

Born in Lioessens, Friesland, the Netherlands on August 23, 1923, John (Jan) was the eldest of the seven children of Jan Bandstra and Antje Fokkema Bandstra. In 1945, John professed his faith in Jesus Christ at a church in Sri Lanka on his way to Indonesia as a member of the Frisian Battalion. Upon his return, he fell in love with Margaret (Maartje) Mulder and they were married on March 20, 1951. Their wedding verse was “Be a blessing” (Genesis 12:3). John and Margaret’s honeymoon was passage on the freighter Edam to Canada.

In 1955 in Smithers, John co-founded a small trucking company, which was named Smithers Transport, and is now Bandstra Transportation Systems. John viewed establishing a solid business as a means of providing employment and serving his community. John remained closed  keenly interested in the business long after his retirement in 1988.500

John helped to establish Smithers Christian Reformed Church where served as an elder for many years and was instrumental in launching Bulkley Valley Christian School. In later years, he was an active and well loved member of Bethel Reformed Church. John and Margaret supported many charities, and they welcomed many family members, friends and other guests into their home over the year. He lived a life of blessing others.

His deep faith in God and devotion to serving Him was evident to all. John was a genuine, gentle and gracious man, a supportive husband, a dedicated father and a Pake (grandfather) who was interested in each of his grandchildren and great-grandchildren.

Camping was a favourite activity for John and Margaret, taking their motorhome to see children and grandchildren. John and Margaret enjoyed traveling around the world including spending time with family in the Netherlands. They played many, many games of Scrabble and he always enjoyed a good fame of Chess.

John is survived by Margaret, his beloved wife of nearly 70 years. He is also survived by eight children, twenty-nine grandhilcden and forty-eight great-grandchildren. Also his brother Dick (Smithers) and his sister of Eelkje (Drachten, Friesland, the NethNeterlaerlnds.

We will miss his wonderful combination of gentle good humour, integrity and strength of character. We are confident that they God he loves has welcomed him to his new home.

You watch the memorial service here.

John was a part of our ceremonial tulip planting in 2019. 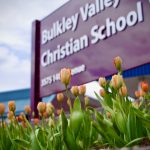 The “Liberation75” tulip bed was planed at BVCS in 2019. The tulips commemorate the liberation of the Netherlands from Nazi control—an historic event in which John was a participant as a young man. 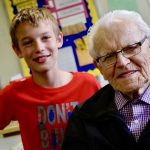 John and one of his many great-grandchildren, during grandparents day at BVCS.

There’s always a lot going on at Bulkley Valley Christian School, and we’d like to keep you in the loop about it. Just sign up using this link and we’ll include you in our monthly eNewsletter.